For years, right wing propagandists have been pushing lies about President Obama.

One of them, that his spending is the reason for huge deficits and debt – was their primary talking point for the first 4 years of obama’s presidency.

It relies on conservatives being intellectually lazy.

Its a fact that the debt has increased by about 8 trillion dollars since Obama took office.  Right wing propagandists want all thinking to STOP right there.  And conservatives oblige.

This chart shows which policies created that debt. 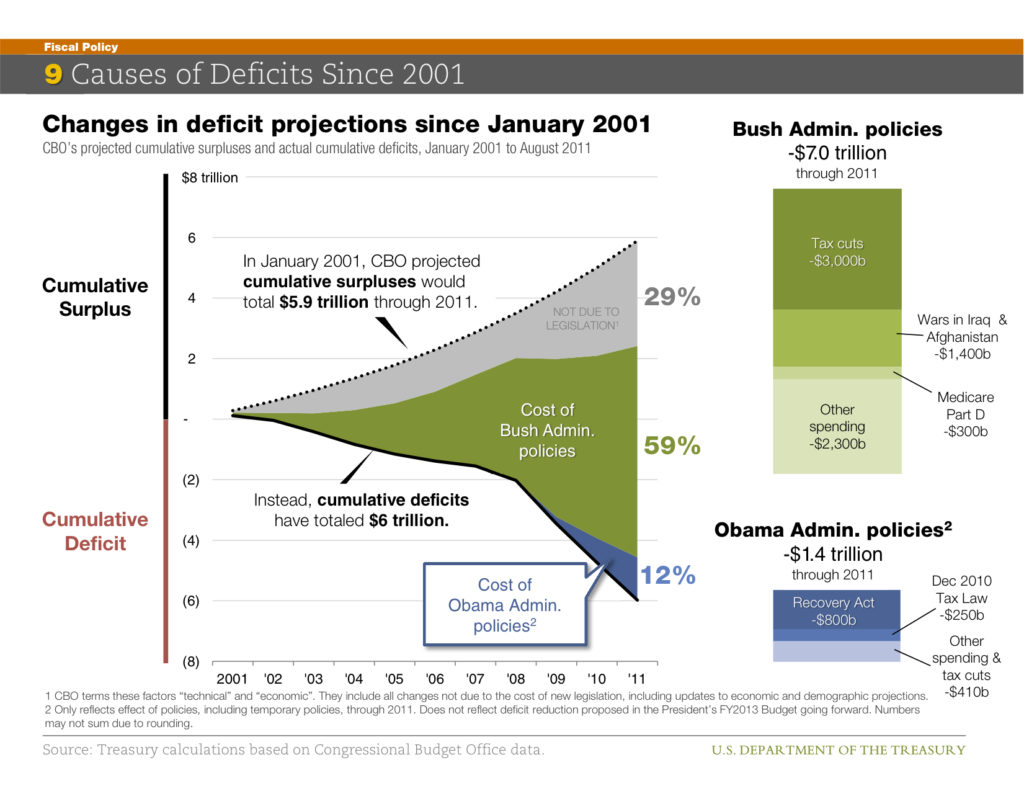 Right wing liars want you to believe that obama is responsible for all debt added, despite the fact that his policies have added basically nothing to the debt once the impacts are considered.  More on that later.

Right wing liars want you to believe essentially that the budget was balanced when Obama took office (instead of the 1.2 trillion dollar deficit GWB left behind).  That is the only way to realistically blame him for all debt added.  But intellectually lazy conservatives don’t even think that far.

The fiscal year 2009 deficit was 85% GWB (tax cuts, wars, bank bailouts etc).  15% obama (the stimulus which created millions of jobs and helped end the bush recession).  As shown in more detail in the chart below.

Going back to Obama’s total impact on the debt, from policies he signed into law.

Stimulus, 800 billion in debt
Cost as measured by the CBO.

Stimulus, REDUCES debt by 100 billion
Millions more people were employed by the stimulus, and adding up the tax revenue from those additional employed americans likely exceeds 100 billion easily.

Extending the bush tax cuts for 2 years, 620 billion in debt

Sequester, REDUCES spending by 1.1 trillion
The sequester was not a good thing.  Estimates show a loss of 1.6 million jobs as a result.  Thank republicans for this.

Obamacare – reduces the deficit, though the amount is less certain.  Initially the deficit was projected to be lower by tens of billions, but republicans have been chipping away at the law.  In the long term, its been projected to save trillions.

Is that comprehensive?  Surely not.
But a quick accounting shows that Obama’s policies have greatly reduced spending, more than cancelling out the cost of his stimulus and the 2-year extension of the bush tax cuts.  And tax revenue has been increased with the partial repeal of the bush tax cuts.